Ha ha… I’ve finally managed to take over Leila’s site…  Well only for one blog post for now.  But how on earth do you start a blog post about who you are and what you do…. geez… I have no idea… so I thought I’d just write and see what came out!  So I’m Sarah Blow, Founder of the Girl Geek Dinners and Community Manager at TweetMeme.  (formerly a software engineer at Cardinal Health).   And I’m betting that you are trying to figure out what that lot means. 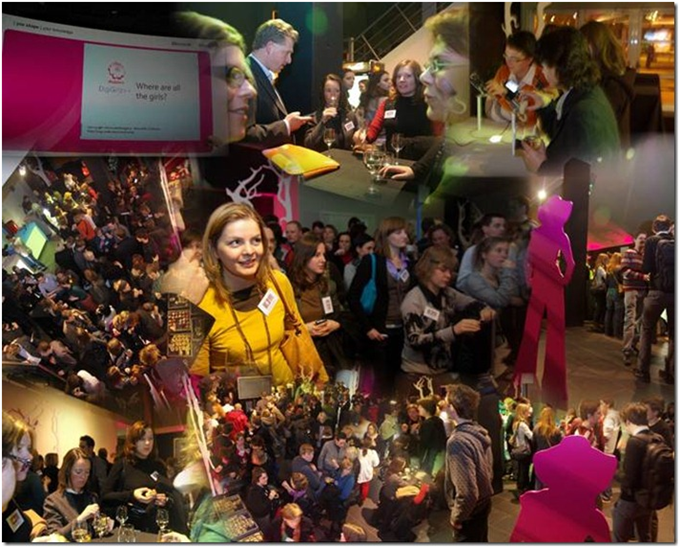 Girl Geek Dinners are technical events for females in the IT industry where they get together over food & drinks, network and hear a talk or three on a technical subject. Guys are allowed to attend so long as they are invited by a girl attending the event. (each girl has one invite to give out to a guy should they choose to do so)  Why the events I hear you say… well I got tired of justifying why I was at technical conferences and informal tech gatherings.  As such I decided something needed to change and I needed to find others like me… Female  but geeky.  There was no way my 4 years of university were going to be thrown out and replaced with stereotypical expectations. I wanted to be taken seriously as someone female in IT. And so the Girl Geek Dinners were born in 2005.  today there are over 50 different groups around the world all with the same focus.  To make the IT industry less stereotypical and more about the technology.

Interestingly it  was due to my experience of taking Girl Geek Dinners world wide and learning how to install, create and use online media tools for creating online communitites that I ended up in the job that I am now as the Community Manager at TweetMeme.  The two roles really do compliment each other well.  My previous role to that was some what different and was more systems & software development and design than anything web focused.  It was totally about programming, software testing, following the ISO 9001 standards and so on.  I’m not sure that I could have got much further from one end of the technical spectrum to the other really if I’d tried to.  Now I get to play with the latest and greatest technical tools like the Twitter API and so on.  The interesting thing is I love both skills sets and no matter which set I use as a day job I’ll always end up using the other as a hobby one way or another.  For example this weekend I’ll be down at the Yahoo Hackdays Event doing some coding and playing with their latest API’s just for fun.

So I guess the thing to take away from hearing from me online is, don’t always believe everything you hear about the IT industry, it’s fun to be here!  Dare to give technology a try… don’t just accept stereotypes people try to pin on you if you think they are incorrect. And above all believe in yourself,  work hard and dare to try to achieve your goals whatever they may be.  My latest one is learning to kite surf!

Also just because you aren’t doing coding etc as your day job it doesn’t mean that you can’t do it at all.  Have a play and come to the weekend events where you can learn how to do this stuff if you are interested in learning it!  You never know it may just be the steps to getting your next job.

This site uses Akismet to reduce spam. Learn how your comment data is processed.

Thanks for visiting my blog! I'm Leila, wife and mum to two boys on the spectrum. I'm best known as a tech blogger, but can also be found sharing my views on  motherhood and lifestyle. I'm passionate about raising awareness about special needs and I'm keen to change the stigma around children and adults with needs.  If you'd like to work with me, please drop me an email at swanny@swanny.me Shop my range with Trend Tonic , beautiful ethically sourced jewelley at great prices. For more info, please check out my 'about me' page.

When people blame you… #streamer